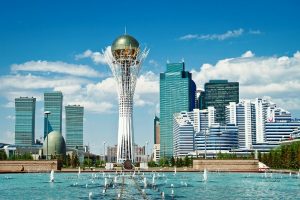 Kazakh is a Turkic language and has much in common with Kyrgyz and Karakalpak. Kazakh is an agglutinative language and employs vowel harmony. The native Kazakh speakers are spread over a vast territory from the Tian Shan Mountains to the Urals. Kazakh is spoken by a total of 16 million people. Kazakh is one of the official languages of Kazakhstan, where there are about 10 million people. There is a large community of native Kazakh speakers in China’s Xinjiang Uyghur Autonomous Region. According to the 2002 Census of Population, there are 560,000 native Kazakh speakers in Russia. The writing system of Kazakh is based on the Cyrillic alphabet everywhere, except China, where the Kazakh speakers use an Arabic-derived alphabet similar to that used to write Uyghur. In October 2006, Nursultan Nazarbayev, the President of Kazakhstan, brought up the topic of using the Latin alphabet instead of the Cyrillic alphabet, but afterwards he renounced that idea.

The subdialect of Almaty, the former capital of Kazakhstan, is the base of Standard Kazakh. The enlighteners Ybyrai Altynsarin and Abai Kunanbayev played major roles in the development of Standard Kazakh. The Arabic type had been used extensively in Kazakhstan before 1929, then the Latin alphabet was used, and the Cyrillic alphabet has been used since 1940. The history of Kazakh began in the 15th century. Most language researchers consider Kazakh to have evolved from Polovets or Cuman. Codex Cumanicus, finished in 1303, is considered the most ancient literary text in those languages. Besides Polovets, Pecheneg and Kipchak, as well as other languages of the steppe-dwellers of the south of Russia, also have close relations with Kazakh.

• There are no prepositions and there is no category of gender in Kazakh.
• Because of the steppe geography of Kazakhstan and nomadism there are almost no differences between the Kazakh dialects. Some language researchers consider Nogai, Barabinsk, Oirot and Karakalpak to have much in common with Kazakh, too.
• Most linguists consider the Russian word "money" ("dengi") to have originated from the Turkic denge and tenge. At present, the tenge is the currency of Kazakhstan and a small coin in Turkmenistan.
• The frontier between Russia and Kazakhstan is the longest land frontier in the world.
• Kazakh has become one of the first languages for which a special computer alphabet has been invented. It has been done because the Kazakh Cyrillic alphabet has nine more letters which are absent in most standard scripts. The computer alphabet, Kazanovitsa or Kaznovitsa, replaces those letters with digraphs with ь and ъ, which have no independent signification in Kazakh
• The population of Kazakhstan consists of 120 nationalities and ethnic groups.