XML is an extensible markup language designed to create documents that contain structured information. The language is called extensible because it does not fix the markup, but only defines the syntax rules for its construction. Developers can create their own markup to perform specific tasks.

The XML language is widely used due its convenience and visibility for users and provides a wide range of software processing capabilities. XML the basis of a great many formats such as XLIFF (for localizable data interchange), MathML (for mathematical symbols), CML (for chemical formulas), MusicML (for representing musical notation). Graphic data is described in the SVG and VML (for vector graphics), X3D (for 3D models). The most well-known formats for text presentation are WML, DocML, DocBook, Open eBook, FuctionBook.

XML is a simplified subset of SGML.

Files with the .XML file extension are Unicode text files that contain character data and markup. The markup is delimited by angle brackets. The basic concept of the logical structure of the XML format is an ‘element.’ Elements are delimited by start and end tags. Elements can be embedded in each other, forming a tree-like structure. Elements contain attributes with quoted values. The first line of the file is the XML declaration that indicates the language version and the level of encoding in the document.

Below is an example recipe marked up with XML: 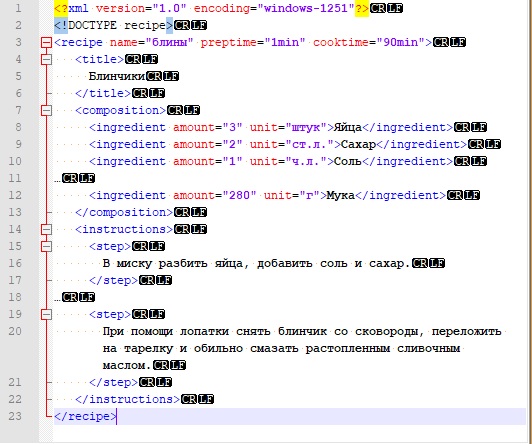 Translation of XML files in a text editor

XML files can be edited and translated in any text editor. However, when working with XML files in a text editor, there is a risk to damage the document structure or to leave untranslated character data requiring localization, so this method is rarely used in practice.

The XML language is supported by most modern translation memory systems. Most popular formats (such as XLIFF) have pre-defined settings. In other cases, a list of elements and attribute values to be translated must be set manually.

ALBA Translation Agency has extensive experience of working with XML files. Our specialists can organize a work process on each job in the most optimal and therefore cost-effective manner for our customers.