Translation from Bulgarian into English

Translation from Bulgarian into English

ALBA Translation Agency does translation from Bulgarian into English and Russian and translation from English into Bulgarian of texts on different themes. Notwithstanding the fact that most Bulgarians know Russian, translation of documents from Bulgarian into Russian is needed quite often. It becomes more necessary because of tourism and trading relations between Russia and Bulgaria and because of the fact that more and more companies and private citizens acquire real estate in Bulgaria. Translation of documents necessary for buying real estate or registering it in Russia, or getting a mortgage loan, documents of title to goods and of tourist booklets not only from Bulgarian but into Bulgarian, too, is the Bulgarian translation most frequently ordered at ALBA Translating Agency. As a rule, after a Bulgarian translation has been done, the verity of the signature of the translator who has done it is attested by a notary public. Our translating agency is also ready to offer services of Bulgarian interpreting in Russia, including interpreting in court.

Bulgarian is a language of the South Slavic group of Indo-European languages. According to different estimates, this language is spoken by 9 to 12 million people in Bulgaria (8 million people), Ukraine (234,000 people), Moldova, Macedonia, Serbia, Turkey, Greece, Romania, Canada, the USA, Australia, Germany and Spain. After the accession of Bulgaria to the European Union on 1 January 2007, Bulgarian became one of the official languages of the EU.

The history of Bulgarian began with the Slavonic migration to the Balkan Peninsula and the missionary work of Cyril and Methodius in Great Moravia in the 860s. Old Bulgarian began to evolve in the 9–11th centuries from the southern dialect of Common Slavic. Old Bulgarian was the language into which Cyril and Methodius translated the Bible and other liturgical texts. In the 12–15th centuries Old Bulgarian gave rise to literary Bulgarian, which became the official language of the Second Bulgarian Empire. After that, Bulgarian developed under the strong influence of Turkish (mainly in the 19th century). The present-day variant of literary Bulgarian was standardised after Bulgaria gained independence in 1878. 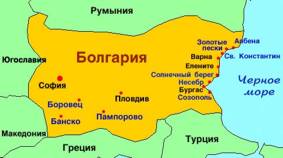 • Bulgarian differs from most of the Slavic languages (except Macedonian) in that it has neither cases nor infinitives, but does have an article.
• A native Bulgarian speaker and a native Macedonian speaker understand each other well, even if they have not studied the second language. Some language researchers consider Macedonian to be a dialect of Bulgarian, but there is still no consensus about it.
• Bulgarian was the first of the Slavic languages to get a Glagolitic alphabet based script. Late in the 18th century, Bulgarian adopted the Russian variant of the Cyrillic script, which had been introduced by Peter the Great. The number of letters in the Bulgarian alphabet over the entire history of its existence changed from 28 to 44.
• Before 1989, Russian was a compulsory subject at Bulgarian schools. After the breakup of the USSR, English, as well as German and French became the most popular foreign languages in Bulgaria.
• In Bulgaria, people nod for “no” and shake their head for “yes”, which at times leads to misunderstanding in their communication with foreigners. What aggravates the situation is that, when communicating with foreigners, Bulgarians often nod for “yes”.