Translation from Mongolian into Russian

Translation from Mongolian into Russian

ALBA Translation Agency is ready to do professional translation from Mongolian into Russian. Mongolia used to be often called “the sixteenth Republic of the USSR”, which reflected the long-standing relations between Russia and Mongolia. The two-way trade turnover between Russia and Mongolia grew by 30 % from 2006 to 2008 and exceeded USD 1.2 milliard in 2008, for the first time in the post-Soviet period. Russia’s share in Mongolia’s foreign trade turnover is 21.3 %. Russia satisfies 92% of Mongolia’s demand for motor benzine, diesel and aviation fuel. Under such conditions, the demand for translation from Mongolian into Russian and translation into Mongolian is constantly going up. Most often, people address our translation agency with a request to do translation from Mongolian of certificates of marriage or dissolution of marriage entered into by Russian citizens in the territory of Mongolia, as well as for translation of documents of title to goods (export or customs declarations, bills of lading, delivery notes and certificates of origin of goods).

Mongolian is the best known language of the Mongolian language family. Mongolian is spoken approximately by 5.7 million people, more than 90% of whom live in Mongolia. The Khalkha dialect, the writing system of which is based on the Cyrillic alphabet, has obtained the widest circulation in Mongolia. Mongolian is also spoken by the inhabitants of the autonomous region of China referred to as “Inner Mongolia”, where the traditional vertical Mongolian script is more popular. The language of Inner Mongolia differs greatly in its dialects from traditional Mongolian. 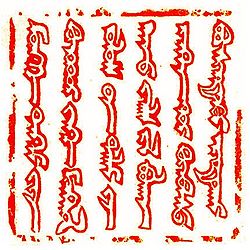 Mongolian has vowel harmony and a complex syllabic structure that allows clusters of up to three and more consonants at the end of words. Mongolian is a typical agglutinative language which relies on suffix chains in the word forms. In Mongolian, the usual word order is “subject–object–predicate”, the word order in noun groups is relatively free, there are eight grammatical cases and the verbs are marked for declension, aspect, tense and modality.

Modern Mongolian evolved from Middle Mongol, the language spoken in the Mongol Empire of the 13–14th centuries. As Mongolian was developing, a vowel shift occurred, long vowels appeared and the case and verbal systems were reformed. There is still a great number of borrowings from Old Turkic, Sanskrit, Persian, Arabic, Tibetan, Tungus and Chinese in Mongolian. The borrowings which are more recent come from Russian and English.

The traditional Mongolian script was adapted from the Uyghur script most probably in the early 13th century and from that time has undergone only some minor changes. Between 1930 and 1932, some attempts were made to introduce the Latin alphabet there instead of the Mongolian script, but in the long run, Mongolia switched to the phonetic Cyrillic script as the base for its writing system. The initiatives for reintroducing the traditional script, which were put forward in Mongolia after the breakup of the USSR in 1991–1994, failed in the face of popular resistance because of the complexity of the traditional script. In informal contexts of communication through Internet and other modern means, the use of the Latin alphabet is common.

The earliest surviving Mongolian text is the report on sports on a stele dated from 1224 or 1225. In the 13–15th centuries, the Mongolian texts were written in different scripts: the Uyghur, Chinese and Arabic scripts. Classical Mongolian evolved in the 17–19th centuries. The Mongolian orthography and grammar of that period were highly standardized.

Interesting facts about Mongolian and Mongolia:
• There are about five million ethnic Mongolians living in the territory of China now, who are gradually forgetting Mongolian because they mainly speak Chinese.
• Some of the languages spread in the territory of Russia, including Kalmyk and Buryat, are languages of the Mongolian language family.
• Mongolian is the official language of some regions of China, for example, of the Inner Mongolia Autonomous Region.
• Down to the end of World War II, the USSR was the only state to recognise the independence of Mongolia from China.
• There are 425 Russian-Mongolian companies operating in Mongolia (including 106 light industry companies and 51 geological exploration and mining industry companies).
• George Bush Junior has been the first American leader to come to Mongolia.