Translation from Ukranian into English and Russian

Translation from Ukrainian into English and Russian

The complexity of translation from Ukrainian into Russian is because of the very affinity of Russian and Ukrainian, as well as the great number of lexical and grammatical units which are similar in form but different in content (and vice versa). Although native Russian speakers through insight understand many Ukrainian words, the grammar rules of their use may be fundamentally different from those in Russian.

The approximate number of the native Ukrainian speakers exceeds 40 million people. Ukrainian is the most popular in the territory of Ukraine (31 million Ukrainian-speaking people), Poland (150,000 people), Canada, Slovakia, Belarus, Argentina, Brazil, Australia and Transnistria (about 70,000 people).

Ukrainian (українська мова) is a language of the East Slavic language group and the official language of Ukraine. The Ukrainian writing system is based on the Cyrillic alphabet. Ukrainian has originated from the spoken Old Slavic language of the inhabitants of Kiev in the Middle Ages from in 10–13th centuries. During its history, Ukrainian has been subject to bans and persecution many times, but it has been preserved through the culture of the Ukrainian people, their folklore and songs. In 13–14th centuries, North-Eastern Rus was under the Tartar-Mongol Yoke, and the territory of modern Ukraine was partially annexed to the Lithuanian State. In that period, under the influence of Lithuanian and Belarusian, the base for Modern Ukrainian evolved (the so-called Koine). After the formation of Rzeczpospolita in 1569, Ukranian began to develop under the influence of Polish, and after Ukraine’s accession to Russia at the end of the 18th century, the influence of Russian upon Ukranian became greater. Modern Standard Ukrainian finally developed in the first half of the 19th century, to a large extent through the works of the poet Taras Shevchenko and the writers Ivan Kotlyarevsky and Ivan Franko. 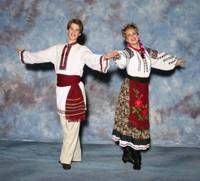 • In 1934, at a beauty contest for languages in Paris, Ukrainian occupied the second place after Italian for the melodiousness of its speech.
• Many words resembling one another in the spelling and pronunciation in Russian and Ukrainian have different meanings (cf. Ukr. лихий (“wicked”) vs. Rus. лихой (“brave”), Ukr. дитина (“child”) vs. Rus. детина (“tall and strong young man”), Ukr. запам’ятати (“to remember”) vs. Rus. запамятовать (“to forget”), Ukr. вродливый (“beautiful”) vs. Rus. уродливый (“ugly”)).
• Ukrainian has one case more than Russian has. This case is used to call someone (for example, Петре!, although in the nominative case it is Петро). In Russian, this case remains in the phrase Боже сохрани! (“God forbid!”)
• According to the 2001 population census, Ukranian was named as the native language by 67.5 % of the population of Ukraine, while 29.6 % of its population named Russian as their native language.
• In modern Ukrainian, as opposed to Russian, the old names of months have remained: сiчень (“January”, meaning “wood cutting time”), лютий (“February”, severe frost), березень (“March”, there are several interpretations there: the birch begins to blossom; birch juice was taken; the birch was burnt for coal), квiтень (“April”, the birch began to blossom), травень (“May”, green grass), червень (“June”), cherries colour), липень (“July”, lime-trees began to blossom), серпень (“August”, from the word серп, indicating the time of reaping), вересень (“September”, blossom of heather), жовтень (“October”), листопад (“November”), грудень (“December”, from the word груда (“frozen rut of the road”)).